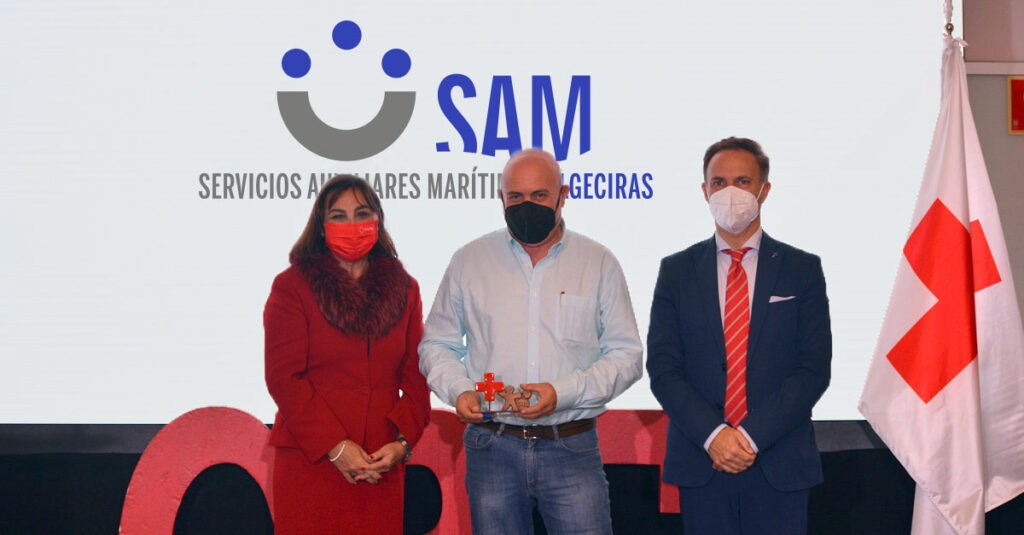 Alonso Group’s multimodal logistics platform receives an award from the Spanish Red Cross for its involvement and support to the humanitarian organisation during the first months of the pandemic. An effort that has been recognised at an event held with all kinds of health measures and which has brought together the rest of the companies involved in these social programmes.

Servicios Auxiliares Marítimos Algeciras (SAM Algeciras) has recently received the recognition of the Spanish Red Cross for its commitment to those groups most affected by the COVID-19 crisis. An award which represents the support during the hardest months of the pandemic with the cession of a refrigerated container –reefer– to the charity organisation which allowed it to store all kinds of perishable food and basic need products which, later on, have been distributed among people in need.

Specifically, the refrigerated container was destined to the Spanish Red Cross of Puerto Real (Cádiz) for the deposit of foodstuffs which, in a disinterested way, were delivered by associations, individuals and companies to the international charity organisation. A gesture of solidarity from SAM Algeciras, the multimodal platform that Alonso Group manages in the hinterland of the port of Algeciras, which is committed to coordination and joint work between institutions and companies for the benefit of society. All contributions add up.

Awards marked by the pandemic

The award ceremony brought together other companies from the province of Cádiz that have participated in the Spanish Red Cross aid programmes aimed at combating unemployment and the consequences of the pandemic. An event where social distance and the use of masks marked the day. In fact, the awards took more than a year to be held precisely because of the health situation resulting from COVID-19.

The Spanish Red Cross is an organisation that provides aid in the event of accidents, earthquakes, wars, terrorist attacks and all kinds of disasters or humanitarian catastrophes throughout the world. Since its creation in Switzerland in 1828, the Red Cross (and Red Crescent Movement) has been present in hundreds of countries helping the civilian population.

Since the beginning of the health crisis, SAM Algeciras, as well as the other companies in the Alonso Group logistics division, has continued to develop its essential activity in order to ensure the proper functioning of the global logistics chain. A relentless work to achieve outstanding logistics and more necessary than ever. In fact, the movements of the different supply chains, by land, sea and air, are fundamental to ensure the correct operation of the production, consumption and distribution centres in an interrelated and global world.

Manage Cookie Consent
Cookies on this website are used to personalise content, provide social media features and analyse traffic. We also share information about your use of the website with our social media and web analytics partners, who may combine it with other information you have provided to them or that they have collected from your use of their services. You can customise your acceptance of cookies by using the buttons below. For more information, please access our cookie policy via the link at the bottom of the website.
Manage options Manage services Manage vendors Read more about these purposes
Settings
{title} {title} {title}